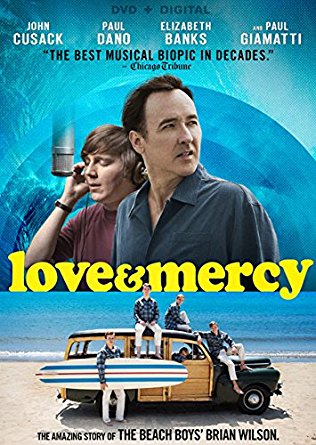 Art in the Form of Film: Love & Mercy

SPECIAL Price: $5 includes a glass of wine or a bottle of water

Description:  The Beach Boys epitomized not just the California Beach sound but the happy, optimistic tone of much of 1960’s pop music.  As is often the case, reality and image don’t align.  The 2014 film Love & Mercy tracks 2 key periods in the life of Beach Boys co-founder and creative soul Brian Wilson.  In the 1960’s, contrary to the happy facade Wilson increasingly suffers under the weight of fame and abusive father, who was the band’s early manager, and can’t let go even after being fired.  Wilson suffers a nervous breakdown.  In the 1980’s the film finds Wilson as barely able to function under the care of another domineering male, psychotherapist Gene Landry.  Will new-found love be able to wrestle Wilson’s life back to something approaching normal? Staring John Cusak, Paul Giamatti and Elizabeth Bank, Love & Mercy is rated PG-13.  Instructor Paul Marino will introduce the film, raise questions to ponder and host a post-viewing discussion.

Tickets available at the door on the night of the event.