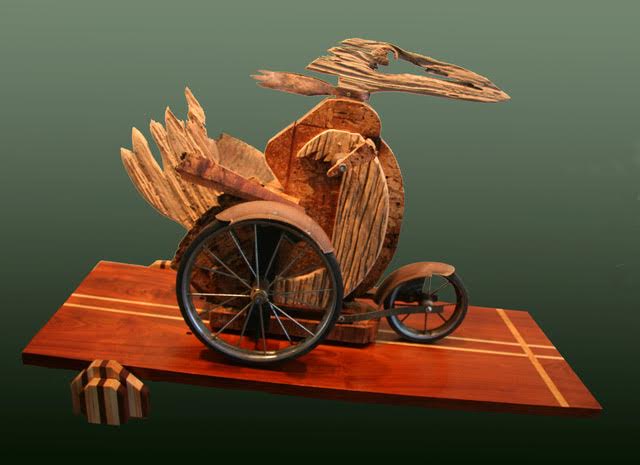 ART EXHIBITION – NOV – From The Realistic to The Whimsical: An Artistic Journey – Robert C. Brooks

From The Realistic to The Whimsical: An Artistic Journey
Robert C. Brooks
Nov 4 – Nov 27

In 1990, when Graphic Imagination began, my art career was propelled into the realm of realistic illustration in pen and ink by a commission for 28 drawings. For the next 15-20 years, I focused on photorealism, capturing every small nuance and detail from the myriad close-up photos of all the architectural features.  Then, as I added wildlife to my still hyper-realistic pen-and-ink repertoire, I beganto look for the unusual whenever possible. For example, instead of the traditional blue heron posed in silhouette, I opted for a hunting pose in which the heron is poised to strike for a fish.

As I transitioned into wood assemblage sculpture, I began to lean even more toward the whimsical and more representational forms rather than the rigidly realistic.The process of creating my sculptures is as varied as each piece, but generally I begin by studying various materials for inspiration.  I rarely draw or sketch the idea ahead of time; but,start by putting pieces in place. As I see how they fit together and how the general concept begins to take shape, I add more or take away some pieces. The original form is often altered by the relationship of parts to adjoining parts. At this point, I may do a rough sketch to solidify my ideas; but, even then, I will change my mind many times before I consider the piece finished. Sometimes, a piece will sit dormant for several months; and when I return to it, I’ll have fresh ideas and may change it completely. What begins as a swan may end up as an eagle or some other creature or object that is totally different from what it started out to be.

Part of my process also involves the writing of poetry. Usually, a piece inspires the poem; and I start writing it sometime within the formative stages but not usually finishing it until after the piece is complete. Once I have the sculpture and the poem finished, I consider the process done…..well, almost done, until I get a new, wild idea, take it apart, and start all over again!

My technique for creating mixed-media assemblage sculptures involves the basics of any artistic creation such as form, line, composition, texture, negative space, rhythm, etc. I use a variety of hand tools as well as power tools. Some pieces are very precise; and I sand and oil them meticulously while others have tool marks, unsanded finishes, and a generally looser feel. I love to have moving parts in my sculptures, which is often the most challenging technique to overcome. But, the goal is to capture the essence of the creation, and I use any technique I know or can find out about to achieve that goal.The materials I have used include exotic and local woods, metals, and “found objects.” I’m always on the lookout for interesting wood and metal pieces and have many boxes of such treasures on the shelves of my workshop awaiting the next inspiration.