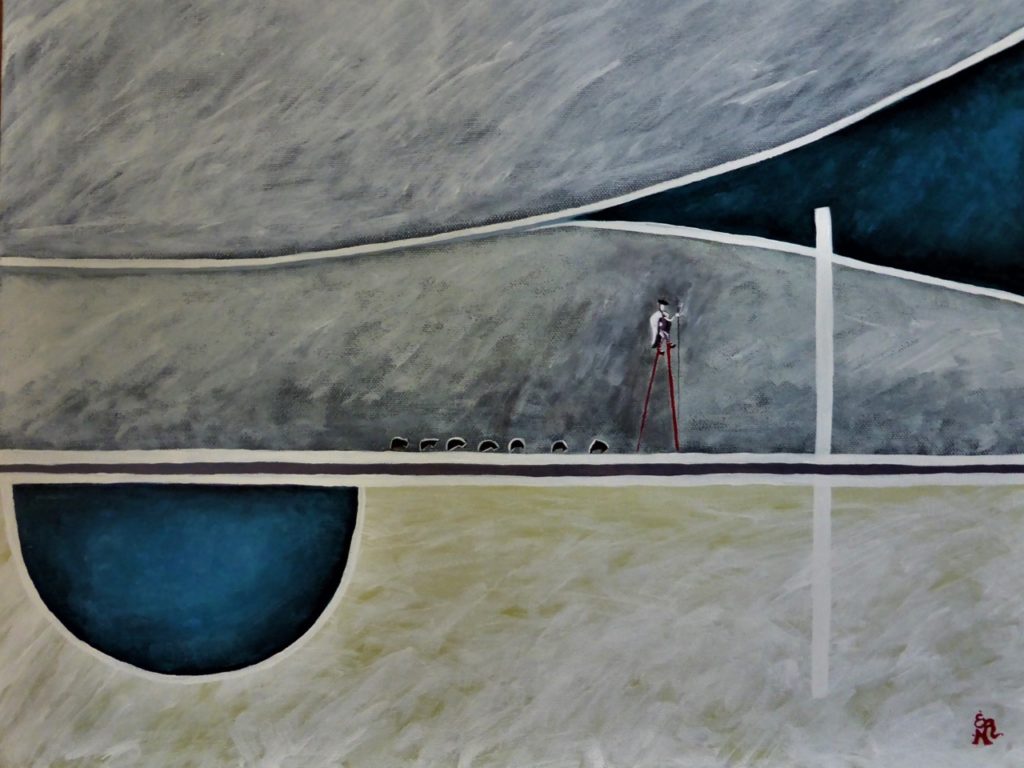 ”Unveiled”reveals the complex and multilayered terrain of a mind and memory which make an identity. I have been immersing myself into the creation of this work since my arrival and adjustment of life here in the United States since November 2015.

Allegory of Plato’s Cave: ”The Book Eater”
”The Book Eater” opens this exhibition as the memory of a real character, the portrait of an intellectual who had lost everything and ended up as a Homeless begging for books to read as these would help him to keep his identity and his dignity despite despair and loss. Plato starts the allegory by setting the start with explaining how human society isn’t learning. He explains how human society is like men trapped in a cave not able to learn and being blocked by a wall with enlightenment on the other side. Although there are those who are ignorant, there are also those who actually get up, look into the light, and things around them. These are the philosophers of our generation.

Comes a vision of a ghost searching for inspiration at the atelier. The pink monochrome contrasts with the anxiety of being in the unknown. On the walls, the images of past paintings which have been created and the blank canvasses are like windows to what is yet to come. A giant prehistoric ivory comb interacting with a feminine figure, different but similar, symbol of human ego, and per extension my interpretation of the myth of Narcissus and its metamorphosis. Through the canvasses, “Traditional Stilts from South West of France,”which were used by shepherds to find their way through swamps, here and there, and ladders, windows and doors opening to an enigmatic world of memories outside the canvas frame.Flying characters that take you to these inner places. The story takes the viewer within the canvasses and invites him to pushes to a reading above limitations of the frames. What does this all mean to you, how do you connect with it? Are you lost in the labyrinth of your thoughts?… Good. Between difference, judgement, faith, liking it or not , isn’t this all Vanity?

This project follows a series of themes and exhibitions I have created about connecting to foreign lands. Here on the contrary it is about unveiling disconnection, resistance, adjusting , asserting your own identity and digging ‘your guts ” out while knowing that in the end, nothing lasts. This vision started with the influence of cubism , (See ”The Book Eater”). I quickly quit the multiple angles of vision of a subject though.I am also influenced by Marc Chagall with the dreamy vision of memories and an ancestry that an artist immigrant tries to immortalize as vital keys to his identity.My other influences are timeless prehistoric petroglyphs, the mystical religious stained glass works (I seek to obtain somehow the effect of the light coming from behind the canvas), and orthodox icons reminding me of my Eastern European roots.This current work fits into a series or longer body of work where rather than absorbing the outside world energies I am revealing my own.

”If I can get the viewer to pause even for a moment to question the nature of reality based on what is conveyed… then I’ll be satisfied that I’ve done my job correctly. And if I’ve somehow managed to also inspire you, and wonder, then we both have”