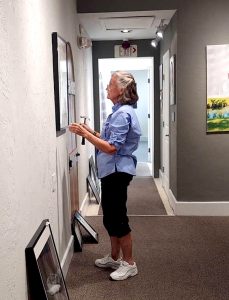 I don’t remember exactly when I fell in love with Carolyn Land’s work.  Since I only became acquainted with The Hub on Canal six years ago, I know it has to be less than that. But I do remember when I fell in love with her. I took a workshop with instructor Carolyn at the Art League of Daytona, and the woman awed me! She had paints, tissue paper, adhesives, homemade crazy paper, texture boards, pieces of rust, decorative papers, and pieces from nature. She threw paint onto canvas and onto paper. Then she ripped the paper up, waved her magic hands over the canvas, and a masterpiece emerged.

Ok, well, it wasn’t quite like that. After laying in a background, Carolyn played with her impressive array of bits and pieces as if they were parts of a jigsaw puzzle, trying one, then another, then flipping and trying another location. Then she added more to the background.  She stepped back and pondered. In the meantime, she was attentive to each student, willing to offer suggestions and find specific points to praise.

In my case, she suggested a touch of gold foil, just specks, really, and my canvas became dramatic. While I was fiddling with driftwood and other beach finds, she turned my driftwood 45 degrees, and transformed the artwork. My first artistic attempt is proudly hanging in my home.

I continued taking classes with Carolyn at The Hub on Canal. I know she is dismayed at my lack of organization (she is SO organized), but sometimes I have been able to give her some of my personal nature finds, and it thrills me when I glimpse something that has been in my bag of treasures appear in her artwork.

After breaking my back in September, I had to quit taking classes for a while. Carolyn commiserated because she had suffered back pain for years, spinal stenosis and sciatica. When I decided that I could resume classes, I was startled to find that she had taken a break to deal with the back pain. Then I heard devastating news; the back problem was infinitely worse than her doctors’ diagnoses.

Recently I had the opportunity to visit and chat with Carolyn at her home. When I approached her door, I marveled at her plants, but she told me I hadn’t seen anything yet, and she was right. Her lovely home has a patio filled with even more plants, a place perfect for a conversation. I didn’t know much about Carolyn from class except for her adoration of her grandson and her love of nature. I was excited to get the chance to delve into the path that generated such creativity and talent.

She is motivated by the natural elements in nature. Not surprisingly, Carolyn’s first memories involve both nature and texture, key features in most of her art.  She says, “I was born in Brooklyn in the concrete jungle. I remember sidewalks and concrete buildings and wearing tie shoes. Then when I was around three or four, I remember one Easter Sunday coming out of church, and having Mary Janes on, and I saw grass and flowers. I took off the Mary Janes and put my feet in the grass and vividly remember the soft texture of the grass compared to all the concrete where I usually walked.”  She continued, “I also remember sitting in my grandmother’s backyard at the base of a tree where all the roots came out and broke the concrete. I realized that those roots were very strong. They not only could hold up a tree, but they could also break through the concrete.”

What a remarkable observation and conclusion for such a young age! This memory was the start of her love of trees, roots, texture, and nature which motivate her work.

It was her junior high school art teacher, Bea Kettlewood, who recognized Carolyn’s artistic ability and later encouraged her to go into teaching. She was fortunate enough to do her student teaching with her mentor in her hometown school of New Milford, New Jersey; her own education continued with an MA + 30 credits in administration and curriculum development, and she has worked in many areas of education.

In addition to her teaching, she pens a blog called “The Creative Spirit.” It is insightful and inspirational and a delight to read. Check it out: https://www.perceptionsbycaland.com/

Here you can read her artist statement and learn more about why nature grounds her. Art is an emotional thing, and her advice to her art students is “Feel your passion. Paint what you love.”

When I asked her if there was any medium she hadn’t tried, she took a moment to come up with “cold wax,” which she considers not to be a Florida medium anyway. When I quizzed her about mediums she had tried but didn’t like or felt unsuccessful with, she responded, “pottery.” It isn’t that she doesn’t like it; she collects it. However, her back issues have prevented her from pursuing this art form.

Carolyn is now on a medical journey. Her worsening back pain led her to seek further treatment. Repeatedly doctors told her that the pain she was having was from her stenosis. Repeatedly she told the doctors that she knew what that pain felt like; this was different. One evening after a visit to the ER where the experts parroted previous diagnoses, her son drove her to the Mayo Clinic, arriving at midnight. By 7 am these doctors had a new diagnosis: Aggressive Stage IV non-Hodgkin B-cell Lymphoma (NHL)

One of the quotes in Carolyn’s blog is, “Every adversity brings new experiences and new lessons.” I asked her how she had responded to her latest adversity, and she said, “You do get a new appreciation for life. Your creativity comes into play because suddenly, your life has changed, and you must think of new ways to do things.”

My beautiful friend says, “Generally, I am finding the medical profession needs to listen more to what their patients are saying. Today we must be proactive with our own health care.” Because she kept searching for an answer, Carolyn has started treatment, but she is working and has a new blog entry. But she has a message that she wants to be heard, loudly and clearly, if you feel that something isn’t right with what you are being told. “Advocate for yourself!”