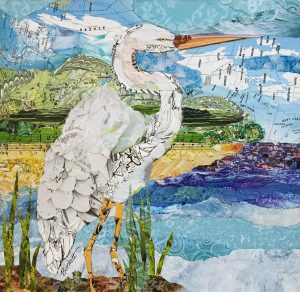 Okay, we’re not actually cousins, but we do have someone in common. My grandmother’s sister’s son, Reuben Hale, was one of Cindy’s art professors.  Reuben was a painter, sculptor, and inventor, and was very well known in the art field. I have always considered him the most interesting of my relatives. His work revolved around a repetitive theme: his belief that “the changing status of the female in society now and in the future will be one of the most significant changes of our time.”

If Cindy were my real cousin, Reuben would be competing with her for most interesting. And she certainly exemplifies the “emerging woman” that he was continually portraying in his art.

Cindy is a collage artist with a studio at The Hub on Canal. However, this hasn’t always been the case; she began as a painter at The Hub…but I’m getting years ahead of myself.

Practically an artist in the womb, Cindy has always had art in her life, beginning while living in rural Lantana with a non-driving mom. Imagination and art were her playmates. In elementary school, she was assigned the task of illustrating stories on the chalkboard. Ever supportive, her father spent weekends with her, shopping in art supply stores and encouraging her talent. Her high school years found her illustrating publications and doing commissions for her parent’s friends. Influenced by many teachers and artists, but very significantly at Florida State, she was mentored by an instructor who recently worked for a Chicago ad agency and recognized her talent.

Awards came early for Cindy, although she is not one to pursue them. I am exceedingly proud of my “cuz” for a national ADDY award, the advertising industry’s version of the Academy Awards, placing first in her category with more than 60,000 entries. And…drumroll…at only age 27! At the time she was working for a small ad agency in Winter Park, Fl, but her life was about to change. Her agency won an international account, which required setting up an office in New York City and she was off! From small town to the big city, Cindy became the creative director and co-manager of that office at the corner of Madison Avenue and 49th Street. Her apartment was across the street from Katherine Hepburn’s (one of my all-time favorite celebrities). This girl was “on fire,” one of the few women at the top in the advertising field at that time. (She said it wasn’t Mad Men, but she did learn to smoke and drink Scotch…at least temporarily! I am entranced with this image.)

Common sense soon prevailed, and Cindy headed back to a warmer climate. After working for others for a few years, she decided to be in charge of her own firm. There she did it all, which  involved aspects of the field she was never trained for. Stepping out of her comfort zone led to a very rewarding life, but one with little time for fine art.

A New Smyrna Beach lover since the 70s, Cindy had traded work for hotel stays at the Riverview so often that the top floor room overlooking the river was referred to, laughingly, as “The Burkett Suite.” Disenchantment with the urban atmosphere of Orlando and a longing to return to the coast led her and her husband to a spur of the moment decision to sell off belongings and downsize to a cozy home on the river.

In my opinion, fate stepped in. An artist friend told her about The Hub on Canal before it even opened, and when she saw it, she knew it was perfect. After persuading Sally Mackay and the review board to accept her into The Hub as a painter, Cindy soon evolved into the collage artist she is today. Sally encouraged that artistic detour, since Cindy’s collages were so different and she was so talented!

I fell in love with Cindy’s work and was thrilled to find out she taught workshops, which, of course, I took and had a blast and learned so much. I wish that everyone would step into Cindy’s studio and examine her creations. What looks like an eyebrow may be a photograph of a fern; what looks like a painting is actually hundreds of tiny pieces of paper torn from magazines and carefully pieced together to create a delightful image.

I am excited to see what paths Cindy’s “retirement” will take; I’m so glad she now has the time to create and teach. And  she says, when someone loves her work enough “to take it home to become part of their life, that’s better than any award ribbon to me.”