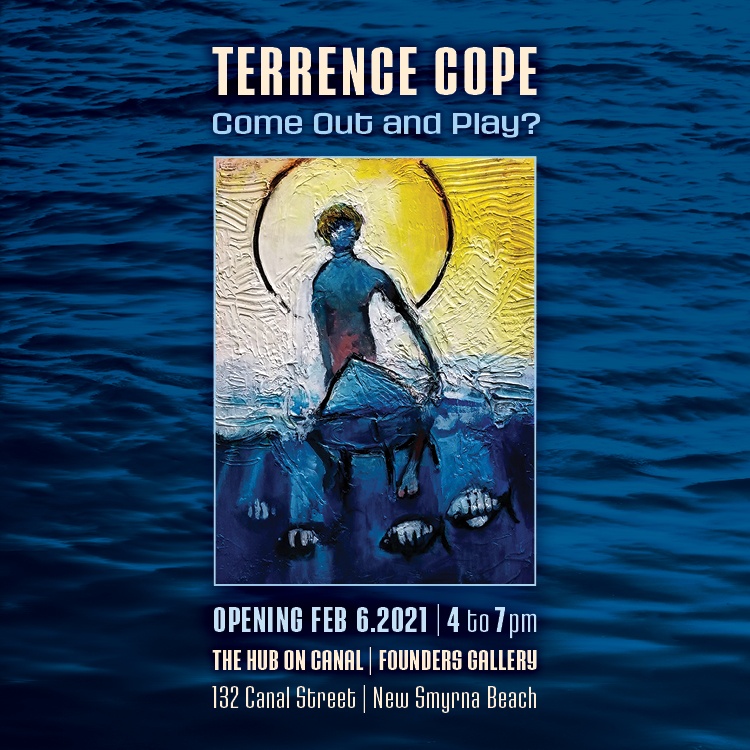 Come Out and Play?

Time that turned my beard white and wrinkles my brow has shaped memories. Memories spill out in texture and color. Details lost or broken in time are now abandoned. Hard lines separate loves and adventures of days gone by. As the tremors in my hand increase and sight climbs the scales of dollar store glasses, I find that images in my head are not so exhausting. Corroded faces of youth stare back from a time not so long ago. Images drawn like Sunday comics isolate images in my playground. My body settles as my mind still believes it can dance through the night.
Oh well …. Waves are good today — I think I shall go to my studio and paint.

About the artist: Twenty years managing Jerry’s Artarama and Pearl Art Stores in South Florida has given Terrence L. Cope a unique life-lesson on funneling his creativity. Cope equates materials to numbers in a math problem or words in a dime novel. Terms like “brush stroke,” “pigment,” “opaque,” “transparent” become the notes in the music we see, coming together in the expression and creation of art. He is excited by the materials he employs — getting lost in the mixing of colors that play with each other while creating a fantasy. No matter how ‘in the weeds’ the artist may get on the way to the finished work, his goal is to entertain and celebrate sight through a dance of the hand and eye. Cope believes that there are so many images that cross our paths that often we don’t stop and appreciate them. And he hopes the observer of his art finds a place in one of his paintings to be entertained. 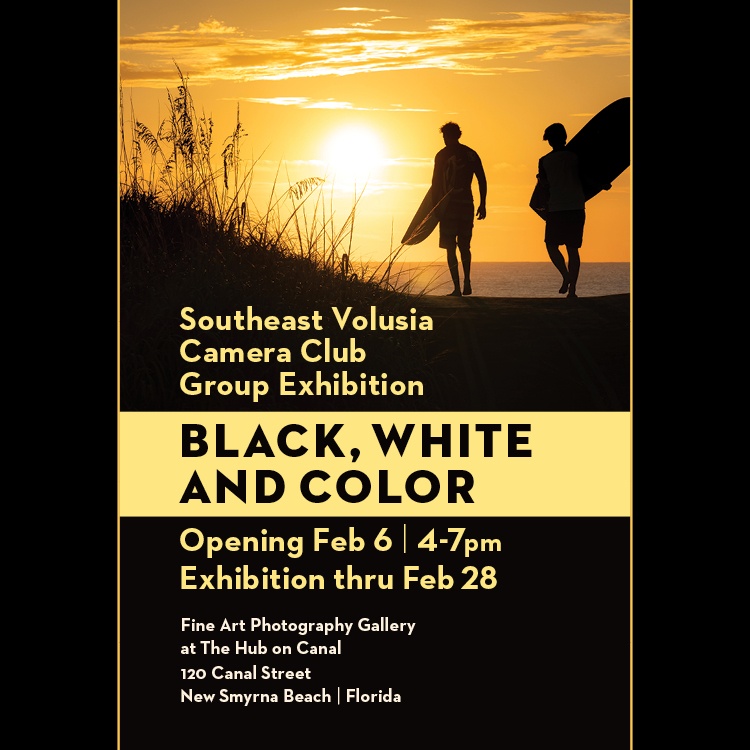 The Hub worked with Steve Trofatter, President of the Southeast Volusia Camera Club, on an exhibition of works by 14 of the club’s members. This exhibition features black & white and color photography of wildlife from around the world, Florida land- and seascapes, and antique cars. Meet the artists at the opening from 4-7pm. Exhibition through February 28 in The Fine Art Photography Gallery, 120 Canal Street, two doors east of The Hub on Canal. The event is free and open to the public.

I love The Hub on Canal. It has a personality, an aura, that evokes an awareness of the presence of tremendous talent and creativity. I think, simultaneously, “I could never accomplish anything like this” and “I wonder if I could produce something artistic.” From seeing the mural on the Magnolia Street side of the building to walking in the door and being greeted by smiling volunteers, The Hub makes me happy. If I enter and see woodcarver Tad Fyock working in his studio behind the glass at the front desk, I get an extra spurt of joy. Tad is always smiling and always willing to chat, whether about his work, about your family, or about general news…just open a conversation.

His studio is filled with all sorts of wondrous creatures, but with a definite emphasis on birds.  Every object is delicately carved and exquisitely colored. I feel so fortunate to have had the opportunity recently to sit with him for an extended chat.

Of course, my first line of questioning delved into his beginnings as an artist. As an only child in the idyllic sounding town of Garden Home, Oregon, he spent much time out of doors in fields of holly, filberts, and daffodils (yes, idyllic!), and even as a four-year old had a fascination for birds.  He loved to observe them flying, and found himself studying their anatomy. A self-taught carver, Tad’s first attempt was not a bird, but a hippo that held matches, similar to one he had seen in a store. (Every home needs a match-holding hippo; I don’t know how I have managed without one.)  His first bird carving was a goldfinch, and though he considers it to be an unattractive piece, he still owns it. And while he doesn’t think of himself as a bird watcher, he definitely was and is a bird observer and admirer, and that came into play after a brief interlude of 50 years.

His work is so impeccable that I assumed that his had been his life’s vocation. Wrong, Donna.  Tad’s life before The Hub is fascinating. When I asked him what his favorite subjects in school were, I thoroughly expected a response of art or biology. Wrong again. His loves were geology and chemistry, and he left Garden Home to obtain a bachelor of science degree from Oregon State University and a master’s from the University of Washington. These years were followed by a stint in the U.S. Army, stationed in Nuremberg, Germany, where he served as a lieutenant.  Laughingly, he told me that since he had a college degree, it was assumed he knew about nuclear weapons, so he was proclaimed a nuclear arms officer. (No offense, Mr. Fyock, but that is rather alarming.)

After the Army, Tad began working for Texaco, where he eventually became their chief geologist for Africa and South America…doesn’t that sound exotic? Luckily, he loves to travel and has visited 70 countries in the Western Hemisphere. In fact, he and his wife Judy (Ha! I neglected to mention a crucial element in Tad’s life…more shortly) have traveled extensively, have done fifteen river cruises, and have one lined up for the near future.

Retiring in 1993 at the tender age of 55, Tad returned to a favorite hobby, woodworking, which morphed into carving. Fortunately, he had a good teacher…himself, although he did take classes to hone his skills for his own unique work. For nine years, you could find the name, Tad Fyock, as an instructor at the John Campbell Folk School, home of the world-renowned Brasstown Carvers.

Surprisingly, he says that he can’t draw; he perceives in 3-D. He is inspired by books (he has 300 to 400 bird photography books) and by real life. Envisioning his model, he creates a profile and cuts out a blank, carving into tupelo or bass wood. (Tupelo honey wood is particularly difficult to procure, and is quite expensive.) Often his art includes other materials, such as copper, brass, rocks, or driftwood. This is followed by 10 to 15 coats of acrylic color, his favorite part of the procedure. Sometimes he also uses wood-burning. While he’s working on one project, in his mind he’s planning the next. His primary goal is for each piece of art is to tell a story, and they do!

As an aspiring artist, I have probably thrown away twice as many pieces as I’ve kept. Tad has only had to discard three. He does have a carving in his studio for sale for 100 lbs of dog food. Ask to see it! His favorite piece is called “The Scallawags,” a carving of three crows. This is the only piece he said that he would have liked to have kept, although he’s happy it has a good home.

Speaking of home, I promised I would get back to Judy, his wife whom he met on a blind date.  Judy is an artist also, talented in sketching and watercolor. She shares her husband’s love for travel, and has been to about 40 countries. However, she wasn’t able to accompany him on most of his business trips — sometimes because of the distance, and sometimes because of the danger involved, such as a civil war in Angola and Yugoslavia, or a cobra in the unisex bathroom in Chad.

Admiring his gallery of works in his studio, I asked Tad what tips he had for beginners. His response: “Persist. Screw up and learn.”

Tad has obviously persisted; his attention to detail is astonishing and his art is spectacular. Take a long look at his variety of works in his studio. If you’re lucky, he’ll be there carving or painting; striking up a conversation with him will brighten your day, I guarantee!

Shop Tad’s Art
Back To Top