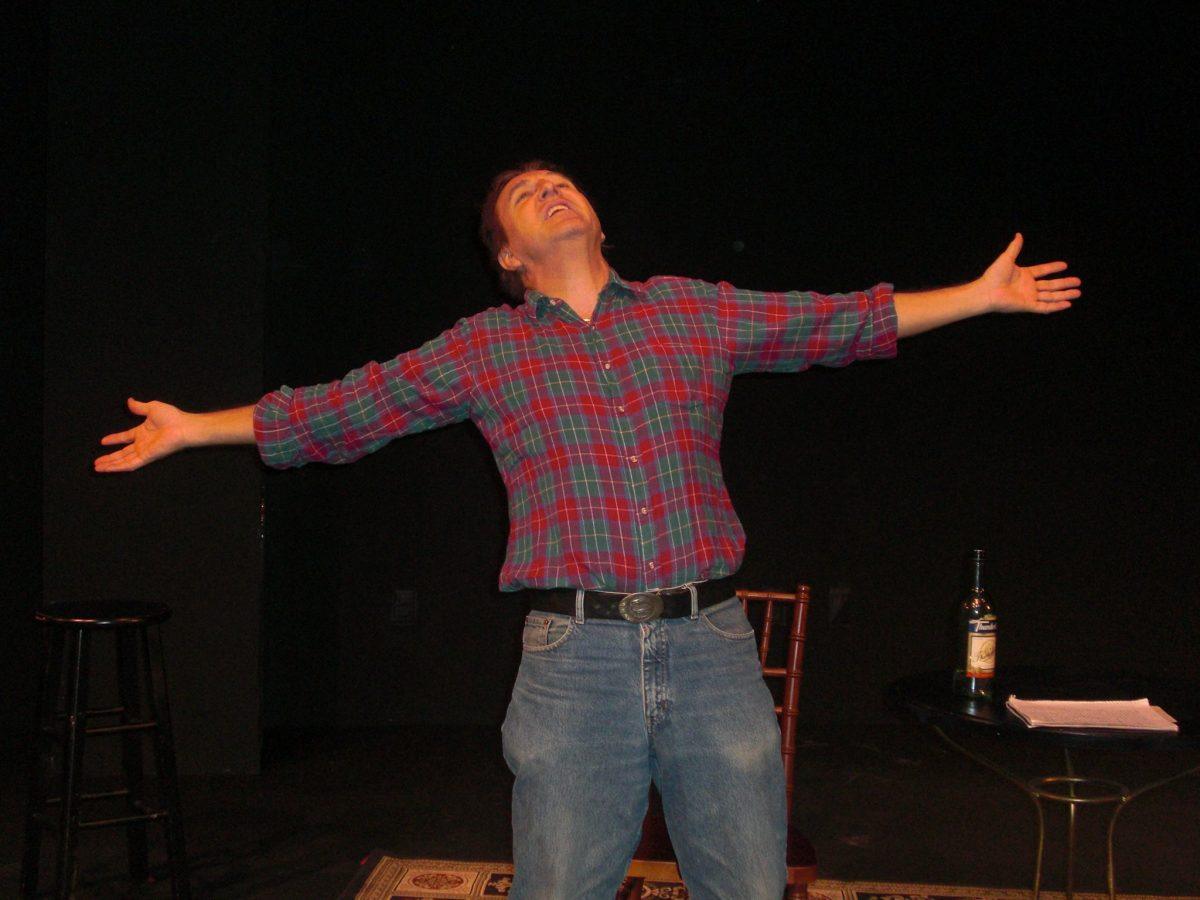 Jack Kerouac, credited with naming the “Beat Generation” and author of the iconic On the Road, was a fascinating, influential and tragic man. This play is based on the moments that he spent in the Green Room before being interviewed by William F. Buckley on Firing Line, his last television appearance before his death a few months later. (Buckley actually stopped the show, berated him for being drunk, and then went ahead with the interview, which you can view on YouTube.) Kerouac was an alcoholic and died at the age of 47.

A chain of events led to the production of this play. David McElroy was doing A Christmas Carol (coming up on its 23rd year) at a now-closed restaurant called Chapters in Winter Park. The owner of the restaurant, Marty Cummins, was also a board member of the Kerouac House. After seeing (and being dazzled by, I’m sure) McElroy’s performance, he suggested that a play should be written about Kerouac. Steve Rowell, a friend of the actor, heard Cummins, and said, “I’ll write it with you.” This was McElroy’s introduction to Kerouac’s writing…and Kerouac became his favorite author, along with Oscar Wilde.

The show has seen more than eight productions, including the Orlando Fringe Festival (which is a fabulous festival that must be experienced to understand why I can’t describe it adequately in this space). A recording of part of the play was aired on WMFE at the Kerouac House (which is where the photo of McElroy in Kerouac’s chair was taken).

McElroy says that he was always interested in writing, beginning with poetry in high school and adding plays in college. As a junior in high school, he performed a poem called The Mountain Whippoorwill by Stephen Vincent Benet, and his teacher asked him to be in the school play. When he heard the applause, he was “hooked,” he said. He credits his English teacher, Mrs. Wiser, with encouraging both creative endeavors.

He attended high school and college in Oklahoma City and got his master’s degree at the University of Arkansas. It wasn’t until college that he began writing plays—the first was produced in 1980. His A Christmas Carol is the favorite of all his creations, although The Importance of Being Earnest by Oscar Wilde is his favorite play (in which he has been in two productions). His favorite book is Of Human Bondage by Somerset Maughan. Obviously, McElroy is an intellectual and has a deep respect for the classics, which is why his answer to my question about his favorite movie surprised and tickled me. Animal House was his response—which is certainly a classic in its field—and I still recollect certain scenes and laugh aloud. However, I think I was expecting something more esoteric.

Kerouac, too, was an intellectual. His On the Road influenced an entire generation when it was first published in 1957, and that only happened with a streak of luck. The reviewer for The New York Times was out, and the substitute reviewer raved about On the Road: “The most beautifully executed, the clearest and the most important utterance yet made by the generation Kerouac himself named years ago as ‘beat,’ and whose principal avatar he is.” When the regular reviewer returned, he was livid. He hated the book and the substitute was never allowed to review again. More than 60 years later, Kerouac’s influence continues.

When I asked McElroy what he liked most about doing his rendition of the book, he responded, “Feeling the ‘beat’ of the words we have written.” I can’t wait to hear and feel the words and the beat of this production. 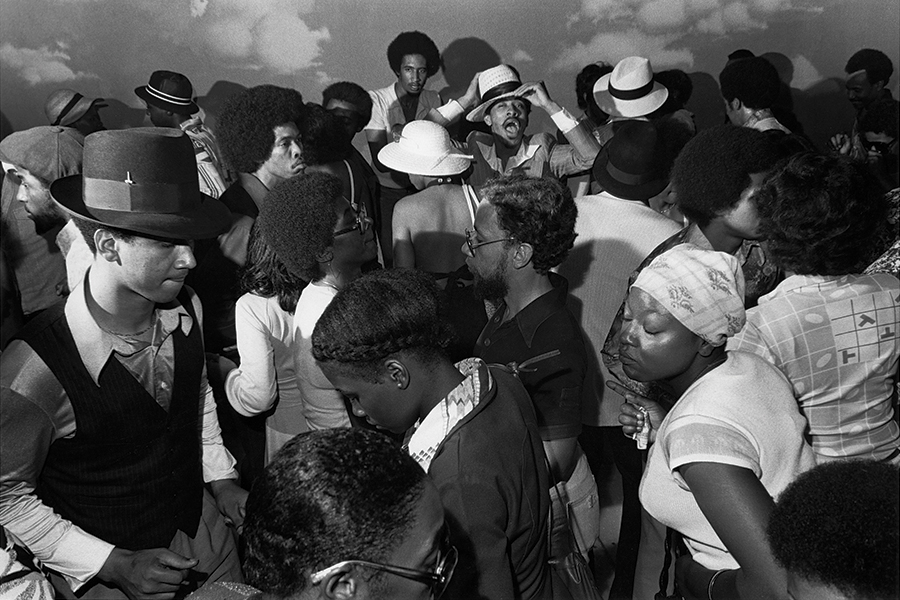 In 2011 we were all told that beginning that year ten thousand baby boomers were turning 65 every day, and that this surge of elders would last until 2039.  That “fact” was not true.  Ten thousand was a per day average over the whole boomer generation.  The truth is that 1955-1961 saw many more babies born than any other baby boomer birth years.  At another milestone moment, that of course meant that more young people became adults between 1973 and 1979 than in any other six-year period in our history.

We shouldn’t be surprised then that so much of the status quo faced challenge in this short window.  And with the foundation for that change having been laid down in the prior ten years, the scales tipped and change was set in motion.  The cultural shifts were not entirely predictable and they certainly weren’t always enduring, but they were profound.  Most of all, they were memorable.  The middle 1970s were truly “A Moment in Time.”

During that iconic era, documentary photographer Michael Abramson (1948-2011) began to frequent the music and dance clubs on the South Side of Chicago.  Given Abramson’s style, he was interested in telling the story of the people and places that he found.  This project became Abramson’s Master’s thesis and he threw himself into his research.  There’s no question that he was inspired by Hungarian-French photographer Brassei, who catalogued the club scene in 1920s Paris.

Only the rare snapshot is photographic art.  Art in the form of a photograph requires that the artist connect with the subject.  Only then can a story be told.  Abramson spent three years regularly visiting the South Side clubs and getting to know the people who would become not just his subjects, but many, as well, his friends.  He laughed, drank and socialized with them on a regular basis.  Abramson said in 2008: “I realize that I have been to every part of the planet…..but I have never been as far away as I was when I was on the South Side of Chicago.  Not because it was exotic, in the misused sense of that word, but because it was so exhilarating.”

The patrons of the South Side clubs were mostly black, mostly younger and of course, urban.  In many ways they represented the cultural change that was sweeping the country.

In a follow up project, Abramson also came to know and chronicle a very different club scene.  These were the dance halls, popular at the time, on the North Side of Chicago.  By contrast, the North Side clubs were mostly white, mostly older and very much suburban.  Other than the leakage of a few newer fashion trends into this world, you could say that the North Side clubs represented the status quo that all that Abramson captured on the South Side was pushing against.

A Moment in Time: 70s Chicago Club Scene is an extraordinary collection of photographs.  Abramson’s effort and commitment allow the viewer of this exhibition to be there and witness this profoundly unique time. This is particularly true of the larger group of images from the South Side clubs.

The first thing you notice about Abramson’s photos is their intimacy.  In nearly every case, the photographic subject seems to invite you into the scene.  That’s a hard-to-see, but easy-to-feel, characteristic.  Abramson earned that closeness and intimacy and it is conveyed in his work.

A trend that paralleled all of the mid-70s cultural change was the growing popularity of “clubbing.”  As humans we crave shared experiences and this need is likely multiplied in the presence of such change.  New York and the “beautiful people” had Studio 54.  The South Side of Chicago had Perv’s House, Pepper’s Hideout and the High Chaparral.  These were the places to be at that time in that place.  The clubs allowed the like-minded to openly express themselves and bend the rules and norms, even if just a bit.

The South Side clubs were not places to drop in and have a drink.  You went there and stayed until closing.  Abramson captured both the sheer joy of the peak of the evening and the sheer exhaustion of the end of the night.  You’ll notice the tables littered with empty glasses and full ashtrays.  Cigarettes and ashtrays are everywhere in these photographs—it was a different time.

You can’t hear the music in the photographs but Abramson manages to allow you to see and feel it.  You’ll feel the energy in the group dance shots.  You’ll see it in the beads of sweat on individual dancers.  And you can most certainly sense the aching feet of those whose night is coming to an end.

One of the most observable (but dare I say regrettable) trends of the mid-70s involved fashion and hairstyles.  Every generation has some memorable fashion trends but no half dozen years ever produced so much never-to-be-repeated (at least I hope not) couture.  Lapels and men’s ties grew to absurd widths (this is clearly visible in both the South Side and North Side photographs).  Shoes achieved extreme heights and hair was big—really big.

A curious feature of the fashion of the day was a blurring of dress for men and women.  Club goers often adopted an androgynous look.  This mirrored what we were seeing in the entertainment industry at the time. The general silhouette was long and lean with jumpsuits and high-waisted pants, each with wide legs.  Men and women shared common styles in shoes and hair as well.

The androgynous look is evident in another way too.  The club scene of the mid-70s was one of the early venues where homosexuality was able to cross over into heterosexual society.  Since this was change craved first by the young, you’ll find it in the South Side photographs but not the North Side.

In some of Abramson’s photographs you’ll question whether you’re looking at a man or a woman—and that was the point.  The mostly young people were there to have a good time—which they certainly seemed to do—and the fact that some were transgender or openly homosexual appears to not have made any difference to what was likely a largely heterosexual crowd.

These few short years in the mid-70s stand out for the magnitude and diversity of change we experienced.  Young people were at the leading edge of all that change.

What we see in these photographs didn’t happen only in the clubs of Chicago, but we’re lucky that Michael Abramson was able to capture it all so poignantly.  Rarely are we able to see so clearly into the past, particularly when so much was happening.  The Chicago club scene of the mid-70s is not a complete visual history of that period, but Abramson provides us with a clear view of much of the cultural change of the day.  It truly is A Moment in Time.