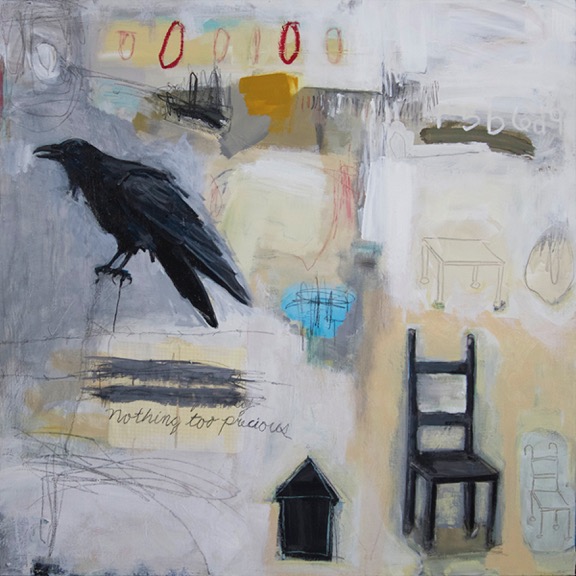 There is something that happens a lot at The Hub. Somewhat akin to an “a ha” moment one gets when something obscure becomes clear, it is the point at which people connect on a deeper level. Given The Hub’s mission of creating community, there are lots of opportunities for these kindred spirit moments to occur. One such cool one happened during First Saturday in February.

Just a few short hours before the opening of Charles Everett’s “Context for Crisis” exhibit, Hub co-founder Sally Mackay was part of a standing-room only crowd gathered to watch a dulcimer demonstration. Moments later, she would step into her gallery namesake and, never having met Everett, would forge a fast friendship with the DeLand-based artist.

Everett, surrounded by 20 or so of his paintings – abstracts with graphite marks, horses, a bull, Trumps hands, his own arms outstretched on two identical canvases – had just finished explaining to Mackay the “Frankenstein” painting he held in his hand that would be part of his artist talk that night.

“It’s one of the ugliest pieces I’ve produced in a certain sense,” said Everett, “but it’s how it was produced that I’m interested in at this point.” By day, Everett’s world is full of computer programming, codes and large data sets. So, he used artificial intelligence to look at all of his paintings. “It created an image and I created a painting of the image it gave me.”

“Could you get your computer to make a sound of your paintings as well?” asked Mackay.

“I have been thinking of that for years!” said Everett. “To hear it, I am obsessed with this idea. I want to be able to hear the images. That’s actually why I began doing this.”

The conversation continued to explore the mathematical values assigned to color that could relate to pitch. Equally fascinating was the notion that when the data is crunching, sometimes faces will appear in the images.

“…the images begin to have clarity, forms,” Everett continued. “There is a kind of wonder and terror. You begin to understand how knowledge is made.”

“I would love to see the face of your work. I think this is the most interesting thing I’ve heard in years,” said Mackay. Painting daily since the summer of 2011, Everett’s collection numbers well over 200 and this is his first time exhibiting at The Hub.

“The Hub is a compulsive place you become obsessed with,” said Mackay. “It’s like what you’re talking about, because there are so many layers, and things that are going on.”

“It’s like this incredible house and you want to know all the rooms and explore,” agreed Everett.

“It’s also about people who aspire. They come here just for fun, the joy and the aha moments like the ukulele class. It’s tremendous fun,” beamed Mackay.

The “Context for Crisis” exhibit represents a period of time from late 2013 to the present in which the artist is exploring abstract, realism, elements of animals, mark making text and illustration in his work.

“When I was four and five years old, I would visit my grandfather and there were these dairy cows that would be close to the fence and it was like seeing a dinosaur. It was so dramatic, exciting and fascinating and they were so big…There’s something very elemental, very dramatic about animals. We define ourselves so often by our distance from them, but we’re also really connected,” said Everett.

So, while there won’t be more than one data-laden piece in the show, there will be “something disruptive and dramatic” by way of his incorporation of animal and human elements into his abstracts.

“Birds tend to be omens,” he said, pointing to a pair of wings stretched onto the canvas. “There’s a lot of drama like there is with horses, the bull. You know there’s something about animals. They are harbingers of the natural world, in all of this drama and menace.”