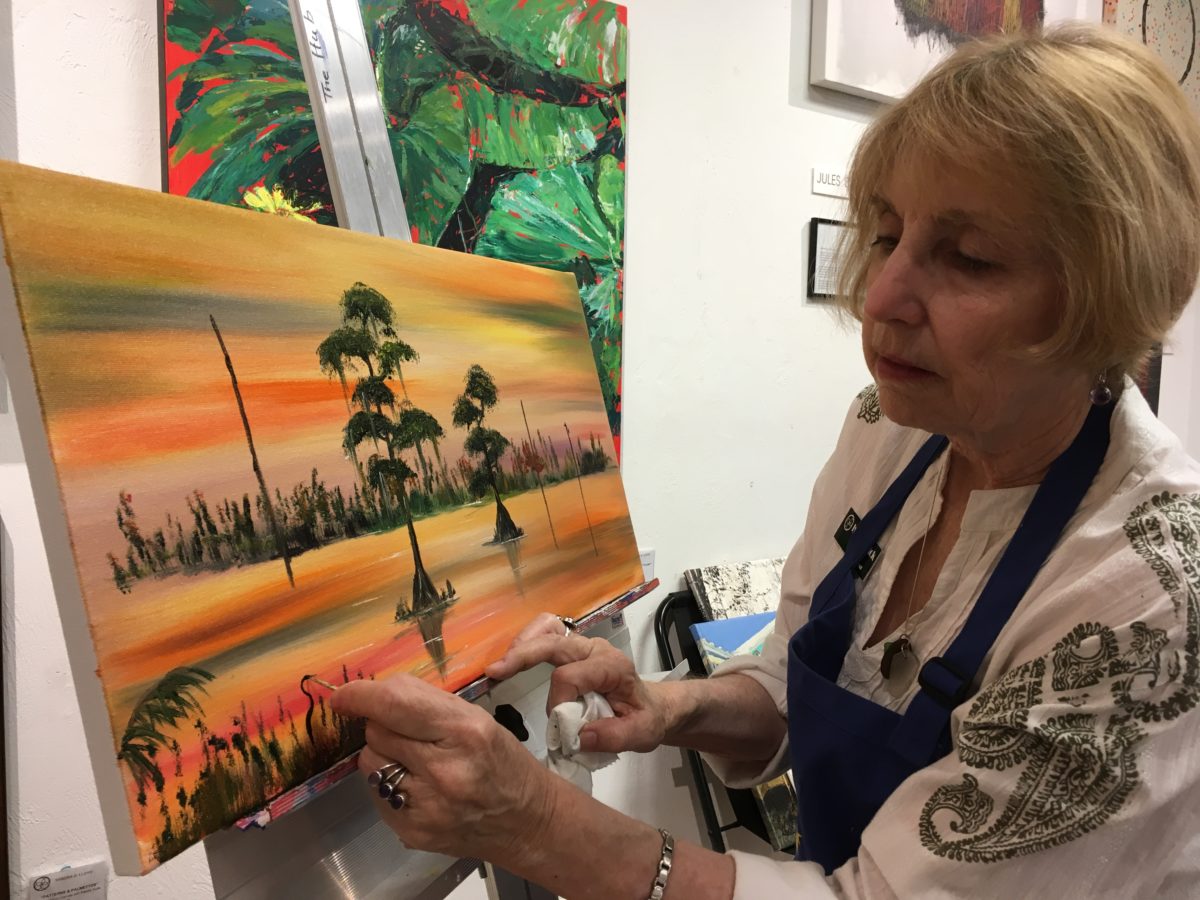 Just as The Highwaymen sold art from the back of a car, Lynn Herrick keeps with their legacy and always travels with a piece or two of her own paintings.

The Highwaymen, a small group of African-American painters, emerged from the Fort Pierce area in the late ‘50s and early 60s. At a recent Talk Art event at The Hub, Herrick spoke of their legacy while demonstrating how to paint a scene inspired by cypress trees at Lake Dora.

“Alfred said if I could do these paintings faster, I could buy my Cadillac sooner,” said Herrick, retelling an often-told story.

“Whoever had the car would take these wet paintings, stack them in the trunk and would go out to real estate offices, banks and motels. Sometimes they would trade paintings for tires.” They would also sell their works alongside the road, distinguishing them as The Highwaymen.

“The style is very distinct. It uses a lot of color and you can tell one Highwayman from the other. Originally there were 26 Highwaymen, and out of the 26 there are 14 left. Out of the 14, there are about 10 who are still painting.” Herrick said sons and daughters of The Highwaymen and some like her, who are not related, are also painting in the tradition.

Mary Ann Carroll, the only female painter amongst the original group, recently participated in a meet and greet at the Orange County Regional History Center with six of her fellow Highwaymen.

Herrick credits her mentor Highwayman R.L. Lewis, whom she met in 2004, with inspiring her. Herrick had invited Lewis to a visual and performing arts magnet school she was principal of. After his demonstration, she was just as enthralled as the students and has been painting in the style ever since.

A Florida native, Herrick never tires of the landscape and draws from memory, takes photographs and “drives around a lot for inspiration” for her work, noting Ocala National Forest.

“I always put a black wading bird in all my paintings. This is my tribute to R.L.,” said Herrick, who studied at the University of Miami and began her art career in the 70s. Before meeting RL, Herrick was into acrylics, basketry and fusion “trying to find myself.”

Herrick’s demonstration was a joyful experience and summoned some positive reactions from the audience: “It looks like magic”; “It’s just amazing how quickly it materializes”; “It looks so real”; “It’s great as a woman that you are continuing the legacy.”