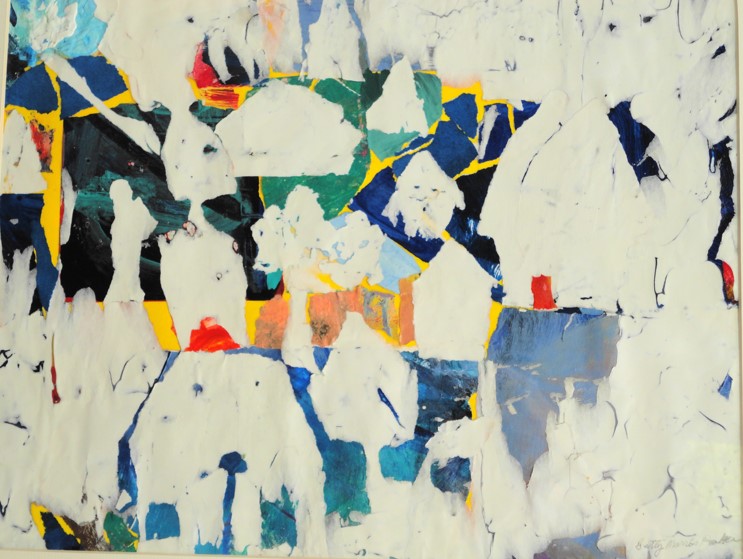 Betty Morris Parker, a mainstay at The Hub since 2012, will be sharing wall space in The Mackay Gallery with Nancy Charles. Their “Works on Paper” will be on exhibit June 3-26.

Originally from Virginia, Parker’s creative urge took her to the Washington D.C. School of Art, where she studied commercial art. She moved to Daytona Beach, where she has resided ever since, and ultimately finished her degree at the University of Central Florida.

Her talents came in handy when working for the American Lung Association (ALA). “If I needed posters, brochures or flyers, or if the company needed any kind of place cards, I’d create them,” said Parker.

Parker’s art career took offer after she retired from ALA. Gifted with a certificate to the Art League of Daytona Beach, she began taking lessons which melded well with her marketing and advertising background.

Fortunate to take a workshop locally at Atlantic Center for the Arts with “one of the top artists living today” Wolf Kahn, Parker recalls first seeing his work in Santa Fe and Taos, New Mexico.

The Hub and Santa Fe

“I enjoy being at The Hub,” said Parker. “”It reminds me so much when I was in the galleries in Santa Fe and Taos, especially Santa Fe where a lot of the galleries are in houses that have different rooms.”

A Word or Two on Technique

Parker creates her abstract collages, typically sized 24 x 28, by priming the surface with acrylic paint, putting down a layer of collage and paste, gluing down shapes from self-painted paper, then covering the whole piece with special paper. She also uses the glue for drawing and making shapes. She finishes by sanding the paper to reveal portions of the collage.

The Power of Encouragement

Parker leaned on another renowned artist, Steve Aimone, for advice when her creative urge pushed her toward exhibiting art outdoors. Aimone suggested she have at least 15 pieces ready to go and Parker popped onto the festival scene, earning many accolades.

The encouragement that started it all was from a 7th grade school teacher in Virginia who recognized Parker liked to draw. That year Parker won “Best of Show” for her drawing of horses.

In addition to the June 3-26 “Works on Paper” exhibit at The Hub with Nancy Charles, Parker is anticipating exhibits in St. Augustine, Daytona Beach and Orlando in 2018.

Like the teacher who reached out to Parker, The Hub recognizes the importance of connecting with students and the underserved. To learn more about its mission, visit Outreach at The Hub on Canal.

Paper is the common denominator between the two Hub artists exhibiting their “Works on Paper” at The Hub on Canal’s Mackay Gallery, June 3-26. One artist, Nancy Charles, is self-taught and uses a layering technique to create colored pencil sketches from her own photographs; the other, Betty Morris Parker, is formally trained and leans toward abstract expressionism through collage.

“I’m not trained in art; I’m trained in animals,” said Charles, during a “Talk Art” event last May that drew a dozen enthusiasts and fellow Hub artists. “That’s my true love and that’s where I come from.” Charles joked she was also not formally trained to be a zookeeper, but a falconer’s license afforded her a lifetime opportunity.

Being an Orangutan Mom

The room erupted into one simultaneous “awww” when Charles flashed the crowd a picture of herself and a baby Orangutan named Enda. From selling Memphis Zoo memberships, to doing outreach with birds of prey, Charles, who as a child dreamed of living in a house with a chimpanzee, “jumped at the chance” to hand raise Enda.

While most of the animals represented in Charles’ work are from the Memphis Zoo, she always had a love for birds – the great Blue Heron being a favorite subject. The highest compliment to Charles is when fellow zookeepers would recognize in Charles’ art the particular animals they tended to.

For local inspiration, Charles recommends Black Point Wildlife Drive. A seven mile one-way road on Merritt Island, she said the changing water levels create different feeding places for egrets, herons and ducks. “It’s just awesome. Finding that place has been amazing for me. There are all these snowy egrets sitting on the mangroves with these dark really cool colors. It’s really striking.”

Charles is literally branching out and challenging herself by sketching trees and water, and is working toward adding a snowy egret to the June exhibition.

About Arches Hot Press Watercolor Paper, Charles says “When I found this paper, my work just took off.” She also uses Prismacolor colored pencils, kneaded erasers to take off top layers if necessary and a #16 X-ACTO blade to pull out highlights and whiskers, and to clean up edges. She’s a “purist” and uses no solvents.

Almost every piece starts with an underdrawing in a 10% warm grey. Backgrounds include many layers and the colors she uses most are warm greys, French greys, blue-greens, and muted lavender. She’s particularly loving a jasmine-colored pencil these days.

“Once I work out my sketch, I never sketch on the actual paper. I get my sketch worked out on vellum then I transfer it with graphite paper.” She drew a lot of laughter telling the group if she were to demo her technique it would be similar to watching grass grow.

The last layer is burnished by hand using extra pressure. She likes the fact that it’s a very flexible medium that can be picked up and put down, and that it’s “pretty indestructible” due to all the layers.

On Failure and Imperfections

“Imperfections makes us who we are and it makes the animals who they are,” said Charles. “I don’t want to change them. I think they are beautiful the way they are. That’s how I work. I draw what I see. I want to draw that creature in all its glory.”

Charles shared an image of an owl she deemed a “failure” which prompted someone to ask, “Do you always have a failure or is it random?”

“It’s real random,” said Charles, “and it happens more and more when you challenge yourself. Before when I had a failure, I would just tear it in half. Now I put it away then get it back out and say, ‘Maybe there’s something I can do with this.’ It’s a learning process; it’s like self-training. If you’re not being taught by someone else to not make mistakes then you have to learn from your own.”

On Being a Non-Joiner and Joining the Hub

“As artists we evolve,” said Charles. “I’m not a big joiner; I’ve always been kind of a loner. I”m much happier hanging out with my animals.”

Charles said joining the Hub has been amazing. “Everyone is so welcoming and nurturing; I feel like I’ve found a second home.”