Jack and David: On the Road (Canal Street) Together 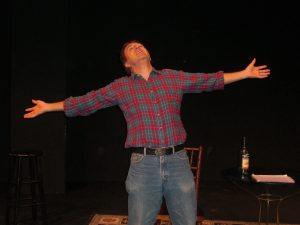 Jack Kerouac, credited with naming the “Beat Generation” and author of the iconic On the Road, was a fascinating, influential and tragic man. 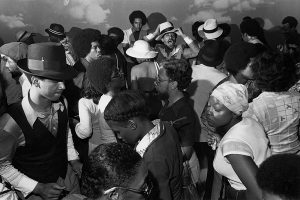 In 2011 we were all told that beginning that year ten thousand baby boomers were turning 65 every day, and that this surge of elders would last until 2039.

Will the Real Debbie Moser Please Stand Up 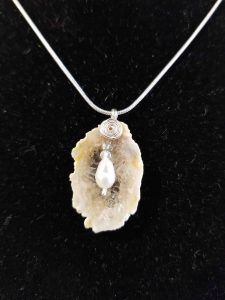 My jewelry instructor and mentor is an onion, a sweet one, but an onion, nonetheless.  You’ll see.

Debbie is quite petite, She has a soft voice and a timid air about her.  Her long salt & pepper hair is pinned up under the ever-present visor.  Her glasses have a slight tint of color.

But Debbie’s work is exquisite.  In many of her pieces of art, she uses numerous natural elements, frequently has multiple metals, does symmetrical and asymmetrical equally well, planning and re-planning designs until they are “right”, and uses her nimble fingers to caress her creation to her satisfaction. 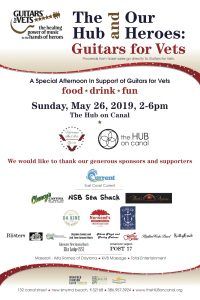 Do you know about the Veterans in Art (VIA) program launched three years ago at The Hub on Canal? VIA serves our wounded warriors and disabled veterans by offering art and music programs through VIA scholarships. Since VIA’s inception, we have served more than 13 veterans with art and music classes of their choice. Perhaps you heard about The Hub’s VIA program at our music night events in November on or around Veterans Day, where we honor our veterans. Our veteran band always draws a big crowd and the featured artwork of participating veterans provides a showcase for their talents. 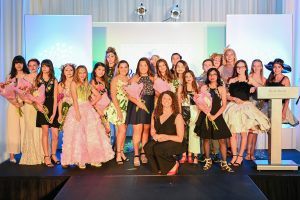 Through this after school program, students learned the basics of fashion design, color, fabrics, sewing, pattern making, and the business of fashion.

Announcing the Winners for the 2nd Annual Chalk It Up! Sidewalk Chalk Art Competition in New Smyrna Beach 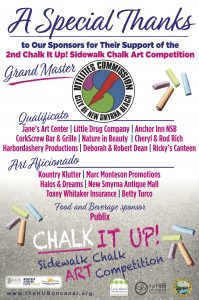 More than 80 artists of all ages participated in the event, creating artistic images on 4×4’ spaces on the sidewalk in front of local Canal Street businesses.  Thousands of visitors strolled the street to view the beautiful chalk art creations. 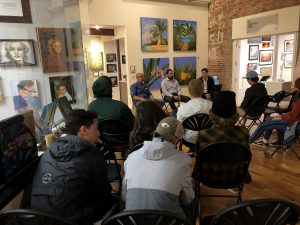 The Hub on Canal is proud to announce that it has completed the first round of judging for the student film festival film entries submitted by high school students throughout Volusia County.

Twelve students are invited to participate in the Phase 2 judging process on Saturday, February 16 at The Hub on Canal at 9am.  These students will provide an overview of their films and answer questions from the judges’ panel.  The film panel is comprised of six film industry professionals including directors, scriptwriters, producers, cinematographers, directors, and college professors. 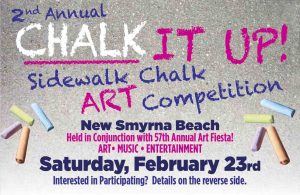 Thank you for everyone who participated in this year’s Chalk It Up! Sidewalk Chalk Competition!

Experience the joy of being part of a fun and creative event where artists of all ages come together to make Canal Street a beautiful exhibition.  Artists of all ages and levels are invited to participate in this exciting event where they use 4’x4’ sidewalk canvases to showcase their works of art.

Chalk It Up! is in its second year and we have expanded the competition to make it more fun for the artists and also for the many visitors who will be viewing the art.  The sidewalk art competition will be held in conjunction with the city’s Art Fiesta! 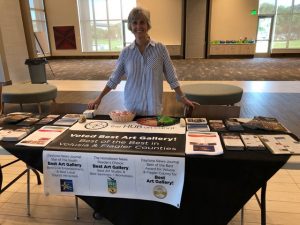 The City of New Smyrna Beach continued their monthly workshop series, Coastal Community Resiliency, on June 19 with a session devoted to our local economy. Hub founder and volunteer, Susan Ellis, representing The Hub on Canal.  Below is the text from Susan’s speech.

“In 2006 and 7 there was a housing boom…and in 2008 the recession hit Florida hard.  It was especially bad in Volusia County – one of the areas that ranked highest in the entire nation for foreclosures.  In 2010 unemployment numbers in Volusia County were 12.8 compared to the national average of 9.8.

If you’ve been on an African safari, whether in the primeval rain forest or arid dessert, it’s likely you’ve encountered Bee Eaters. Small, interesting birds with very colorful plumage, chances of spotting them are relatively easy given the 20 species that are common to the continent. If you haven’t ventured into the wilds, you’re in luck! As many as twenty-two artists’ interpretations representing a variety of mediums will be on exhibit in The Hub’s Higginbotham Studio,  April 6-30, 2018.

The exhibit will be the result of a “Through Another’s Eyes” challenge, the brainchild of Hub artist Tad Fyock.